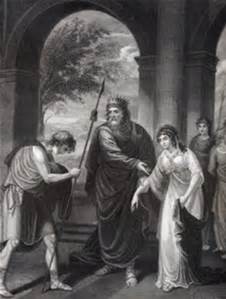 Merab was the oldest daughter of King Saul and his wife, Ahinoam.  {Most likely a different woman than David’s wife, Ahinoam of Jezreel.}  Her name means abundant in the Hebrew language. Merab was promised to David by her father, King Saul, upon his victory over Goliath.  However, this marriage never seems to have taken place.  We are not told exactly why this marriage did not take place but many scholars believe that Merab did not want to marry David.  However, knowing her father’s duplicity, it is also possible King Saul never meant to keep his promise of marriage.

The JFB Commentary says, “he {King Saul} had found it convenient to forget his former promise. He now holds it out as a new offer, which would tempt David to give additional proofs of his valor. But the fickle and perfidious monarch broke his pledge at the time when the marriage was on the eve of being celebrated, and bestowed Merab on another man (see on 2Sam 21:8); an indignity as well as a wrong, which was calculated deeply to wound the feelings and provoke the resentment of David. Perhaps it was intended to do so, that advantage might be taken of his indiscretion. But David was preserved from this snare.”

Merab eventually married Adriel of Abel-Meholah with whom she had five sons.  Merab’s sister, Michal, took her sister’s sons and raised and educated them.  This leads most scholars to believe Merab had probably died.

The sons were eventually given to David and put to death on the hill of Gibeah.