Couples in the Bible: David and Abigail 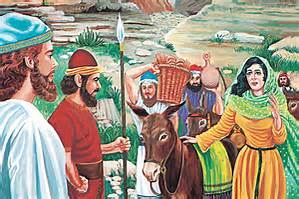 David is on the run from King Saul when he meets Abigail. She is described as discerning and beautiful. {1 Samuel 25:3}

They first meet when David asked Abigail’s husband, Nabal, to find favor in his eyes and come on a feast day. However, Nabal refused.

Abigail, upon hearing of the news, prepares a meal and goes out to meet David and his men. She fell before David’s feet and begged for mercy. She calls on the name of the Lord and ask David to remember her.

It is not until she returns home that she tells Nabal what she has done. Nabal’s heart became stone within him and ten days later he died.

After his death David took Abigail as his wife.

“And she rose and bowed with her face to the ground and said, “Behold, your handmaid is a servant to wash the feet of the servants of my lord.”  {1 Samuel 25:41}

Lessons from David and Abigail: