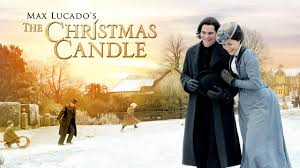 I wrote this review two years ago, but wanted to repost for you.  A great movie to watch on video this Christmas season.

We all need a reminder about the true meaning of Christmas.  Max Lucado’s The Christmas Candle delivers with a heartfelt story.

In Victorian England, it is 1890 and a new age is on the horizon.  David Richmond is grieving the loss of his wife and daughter when he is called to Gladbury, England to serve as their pastor.  Upon his arrival he meets his congregation, all with needs and concerns of their own.

Gladbury has a tradition that every 25 years the Christmas Candle will deliver a miracle to one deserving person.  The candle maker, Edward Haddington, has the responsibility of choosing who is most in need of a miracle.  Pastor Richmond doesn’t believe in this tradition and is determined to help his congregation on his own.  He shows his congregation that miracles can happen with a bit of good deeds and kindness. Through a series of events, all of the congregation keeps the faith and believes they received that year’s Christmas Candle.

Susan Boyle makes her movie debut in The Christmas Candle

David Richmond destroys everything in his attempt to move his congregation into the new age of industrialization.  He alienates all but a handful of members through his actions.  In the end, we are reminded of the true meaning of the season.  Miracles do happen, but sometimes they are not the way that we planned or envisioned.  Will the legacy of the Christmas Candle be preserved?

The story is a great reminder that at times we have to get out of the way and allow God to work. The story is well told and there were several twists and turns throughout the movie that I did not expect.  Susan Boyle makes her acting debut.   Her voice was angelic in the film and I look forward to watching her hone her skills in future projects.

The film is a reminder that it is often easy to put our faith and hopes in other things.  However, if we have faith and ask, God will answer.  Mr. Lucado also reminds us that sometimes God’s answers are different than what we ask for.

You will be left with a good feeling and reminder that miracles still exist.  Sometimes we just have to realize they come in different packages than expected.  Max Lucado expertly wove multiple parts of his story together.  Once the movie is over, embrace the theme and do something for someone else today.  If we all do something for another, we won’t have time to dwell on our own problems.